In late November 2016, a little black cat was rescued. I named him ‘Kuro’, which means dark/black in Japanese. Baby Kuro, at 2 months old, was found trapped in the middle of a roundabout under a heavy downpour rain. His body was half drowned in a puddle, only hoping for luck not to be hit by any cars. He was soaking wet and shivering. Brought him home, cleaned and fed him. Then we took him to a clinic to check his overall condition – he was okay. We then decided to adopt him.

He stayed with another one of our indoor cat, ‘Nomeya (Nom)’. It was a real challenge at first for us to introduce Nom, our big cat to Kuro because he felt as if his territory was being ambushed but we tried our best. At that moment, I remembered my friends back in college years used to compare me with ‘Emily the Strange’; a mascot character, a rebellious girl who owned four black cats. Taking care of the two cats, I decided to create an Instagram account to capture their moments together.

During that time, Kuro had only been eating wet food and dislike cat kibbles. He was being separated from his big brother, Nom; they only look at each other at a safe distance within full monitoring. The best part was, Nom already started to check around Kuro’s place, which means he was trying to get familiar with Kuro’s sense. Kuro on the other hand was showing a better progress. He started to jump around and play with the toy and catnip despite having a fever. 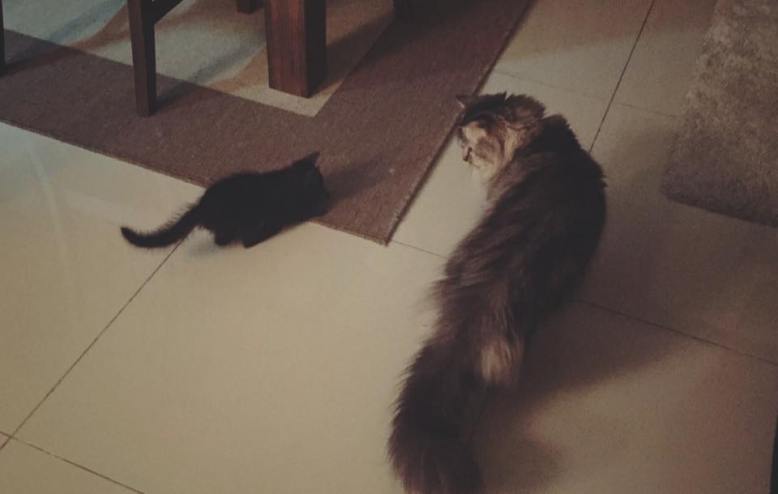 After about a week, we started to notice there was a slight bump on Kuro’s leg – he was limping – so we brought him to the clinic again. We were told it was just a minor swelling and he was given an injection and swelling pills. Unfortunately after 3 days, the swelling got worsen. He couldn’t stand, walk or eat by himself anymore, so we went to another clinic to seek for a second opinion. We were later referred to a specialist at another clinic to do a thorough checkup. By this time, I started to feel something isn’t right.

We went to the referred clinic and waited for 4 hours in queue until Kuro’s turn. We were told that the swelling had already gone too bad and the pus had grown at many spots with major infection. Because the pus was too huge and the bleeding was massive, he was sedated for few times to be treated. He was also dehydrated, so he was put on a drip. God knows how much I cried for that many hours and my body was shaking for witnessing all the procedures in front of my eyes. I felt such a total failure when hearing Kuro screaming in pain. He is still a baby to me. Imagine that suffering. 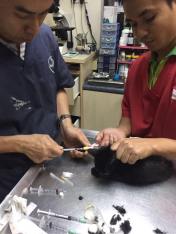 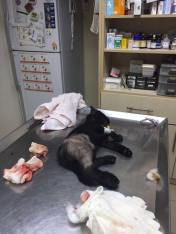 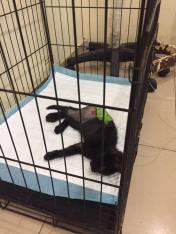 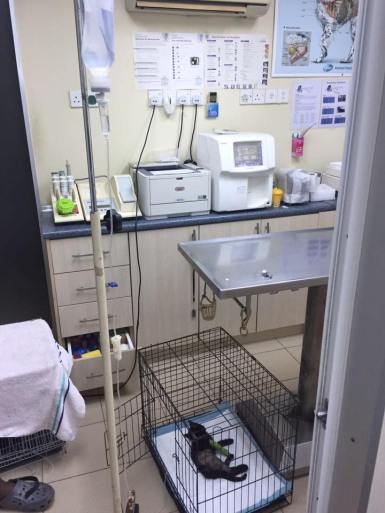 Kuro was admitted and I was then asked to sign a consent form. I tried to be as calm as possible when other people pats my shoulder. He was treated in good hands of the very expert and well-known doctors so I still have a little hope and faith in God that he will survive.

Only later doctor had noticed that not only Kuro suffered with infection, but his back leg’s bones were broken at several spots too. Doctor then informed that it was a very high risk to perform a surgery when Kuro was having infection, so they decided to put on hold and remove the pus first, day after day, before taking an x-ray. I could only pay him a visit on certain days.

On 8th December, the vet called and said that they had no choice but to perform a high-risk surgery. It was risky because the swell had not subside, and Kuro is only a baby kitten, but they had to use adult-sized surgery equipment on him which may caused a burden. Few hours later, we were informed that the surgery went successful. But because the pus and swell were still there, doctor decided to connect a tube and use a pump as a suction instead of sedating him many times. His broken bones had been clipped inside and he will grow depending on it.

Kuro was hospitalized for about 2 weeks, bringing at MYR2000++ cost for his treatment. There will potentially be more additional charges for his medicines/procedures and special food/care in the future. Kuro was treated by Dr. Edmund Yeoh and his team at Veterinary Clinic and Surgery in Puchong.

Honestly, I never expect my regular sharing about Kuro’s condition in social medias caught many eyes and hearts; he is a blessing baby cat indeed. My last share about his post-surgery received overwhelming responses and many private messages to help him out. Because of that, a friend of mine suggested to run a donation drive for Kuro and so I did. Everyone helped to share the Memo that I posted, and few donators has offered to help Kuro to survive and for his treatment.

Kuro was finally back home on 15th December. He was so happy to be home. The swelling has subside but the surgery was only done partially as the doctor preferred to wait for Kuro to grow bigger and will monitor again. There might be a second surgery, but that depends after about a month or two (there is still one bone that’s jointed out). The x-ray films shows some of his bones has been clipped. 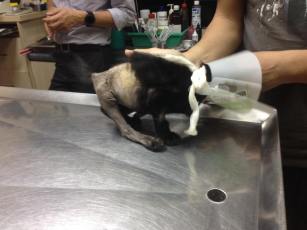 Kuro is now living with only three legs. He is able to walk, run, and play. He has his own room now at home and he’s being temporarily separated from Nomeya. Hopefully he will recover and grow healthily with his other leg function as normal too. 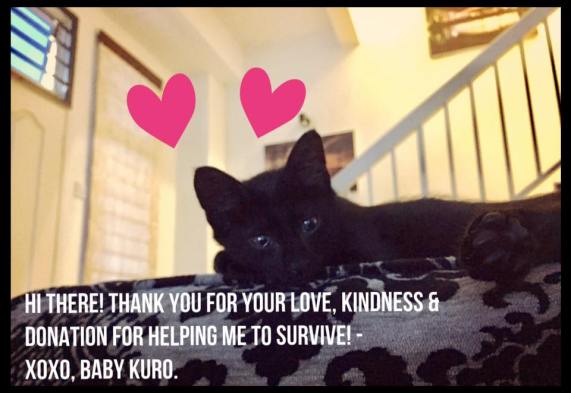