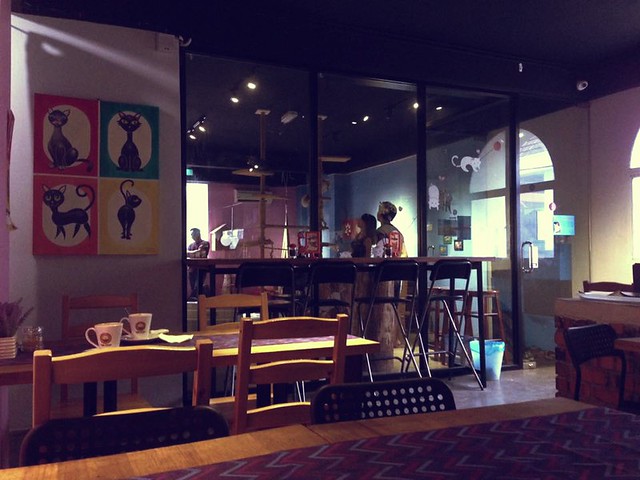 I was lounging at Cat Cafes (yes, cat) with a good cup of cappuccino, warm croissants and accompanied by many furry friends. It was remarkably a mind therapy. I was sitting there and they came hugging me (really) with that soft purring, their eyes blinking slowly and then my mind began to sink wondering why I hadn’t done this sooner. It made me think about what I have been doing all these years for missing such comforting moments like this. I thought about last year and this year.

Beginning of this year, I posted about things that had happened in 2015 — from stuff like travelling solo for the second time, watching Star Wars Episode 7 movie (after about 10 years apart) with an expensive ticket, rebuilt this entire website with a new domain and makeover, and eventually left a permanent job within a very short notice after 4 years of working for the same Company. I wasn’t thinking ahead and there wasn’t any contingency plans for the future. It’s not anyone’s fault — I don’t know how it happened, it just happened. It’s like you didn’t plan to fall in love with someone, IT JUST HAPPENED. Yea, that kind of feeling.

I also wrote a little bit about depression last year, which I’d rather not elaborate about this now because this wasn’t what the post is all about. I wrote about stuff that I had planned; mostly about Books and Writing. Year 2015 was also the year where I started sending my work of writings to several publishers and also the same year that most of it got rejected (well, it was more like the pieces weren’t accepted assuming there wasn’t any reply from the editors after many months). Come to this day, I didn’t regret sending them. I’m glad that I actually tried.

After about a year and a half of swimming and drowning in the ‘writing ocean’, I started to feel comfortable sharing about my experience in writing. There wasn’t any huge achievement, but I’m happy that I have learned a lot along the way. The good thing about this year — particularly about writing — is that I get to connect with more writers and authors from all over the world, I get to chat with a writing mentor from across the globe, and I get more responses from publishers. I was told to write more because they wanted to read more from me. I was informed to write not only short stories but to write and submit a longer manuscript. At this point of time, I couldn’t foresee where would this lead me to, but those were the signs that said I should still continue doing this writing thing. Honestly saying, I’m really terrified by this uncertainty. I leaped into applying for a Travel Writer job at a small, new startup company; but no calls were received. But that’s okay, it’s not like the end of the world anyway.

Now talking about writing a manuscript (in a novel-length kind of writing), I just couldn’t figure out how to do it or if I want to do it ever (yes – you need to write the first ugly draft, yes okay). At the moment, all I was trying to do was to plan and lay out some possible plots. It’s tough, really. I couldn’t imagine how other authors did it and the fact that they did it so well even after many novels were written. I was so caught up with writing short stories and articles; and that it was easier for me. These days, my heart was screaming stuff like: “What are you trying to do, really? Why wasting your time trying to write long stuff that could possibly end up to nowhere?”

This self-doubt evil-thing really sucks. It is. Every night before sleep, it is the thing that bothered me the most — that, and also about my health (my health is pretty sucks too right now, I don’t know what I should do to fix it). But even with that kind of destructive thoughts, subconsciously, I ended up buying tons of books to read for research purposes and to keep it going. I continue to torture myself by doing non-stop work of research, outline and try to write and come up with something. I think I have much of a bigger problem to actually start writing it (especially when ideas not coming through) rather than most people who struggle to finish it. I guess I will keep doing this writing project, for God knows how long. It is certainly a love-hate relationship that I can’t seem to let go. At least for now.

Other than writing (and its challenges), this year, I also tried some other new stuff. I created a new page for books that I owned/read (it was inspired by Austin Kleon’s bookshelf). You may also view from the tab ‘Books’ on this site above — there are still many more books yet to be added to the virtual shelf (it’s actually work in progress), and it will be updated gradually. The customization theme is pretty neat and it would also serve as a great reference when you go to any book sales (so that you don’t end up buying the same book that you haven’t read, which has happened to me before haha!).

Besides that, I also practiced a series of ‘Mindfulness Meditation’ (I’ll post more about this separately), participated in 8-Weeks of Book Study with Jeff Goins, and joined Quran Translation study with Ustaz Nouman Ali Khan. I went for several short trips in within Malaysia due to tight budget this year (no other International travel this year). And just recently, I participated in a 5K run, in which I never would’ve thought of doing so considering the sickness that I’m having. It has been a wonderful experience and I was happy that I managed to challenge myself and my limitations.

I hope the remaining three months of this year would be kind to us. Till then, see you again in the next post!

P/s: Aren’t you excited for the next new season of Gilmore Girls? I know I do, cuz I’m binge-watching the old episodes again 😀